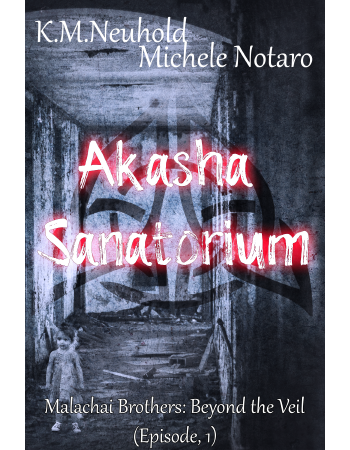 Xander~
My brother Leo and I are exactly like most people—we do what we can to scrape by, we watch each other’s backs, and we fight about stupid stuff… but there is one tiny thing that’s a bit strange about us. We see ghosts. Well, I see ghosts, he only hears them.

Our mother told me when I was young that I had a gift and that it was my duty to use that gift to help others. So that’s what I’ve done. I’ve dedicated my life to helping spirits find their way to the other side. But between meeting a really cute guy who happens to be a ghost, and heading to a haunted sanatorium for a week, I’m starting to think I may be in a little over my head. Something isn’t right at Akasha Sanatorium and for the first time, I’m actually kind of terrified.

Leo~
Being able to hear ghosts sounds cool, but the reality of it is that there’s constant whispers. Everywhere I go there are voices, and all I want is to have some peace and quiet. My brother has no idea that I’ve been haunted by a ghost every day for the last three years. He’s always there, always talking, always following me around. He hides from Xander and drives me crazy.

My brother convinced me to film some stupid paranormal investigations show. I hate it, but he loves it, so I go along with his harebrained plan. Of course, he picks a creepy sanatorium this time. And as expected, it’s awful… but at least while we’re here, I can take advantage of the hot guy with the scar that I bump into. Unfortunately, everything here is so messed up, I’m not sure we’re getting out of it alive.

Akasha Sanatorium is book one in the Malachai Brothers: Beyond The Veil series and should be read in order. This is a paranormal series with a sprinkle of romance and a small number of explicit M/M scenes.